Rifts: Buckets of fun in the New West o'rama

The other night I ran the first session of a Rifts campaign. I know! Right? Rifts!!!!!!

I set the game up about a week ago, as there was this longing in my soul to run the game. It was the first game I had ever played. See I had run games for three-ish years, but never played any. Needless to say that this caused some problems as I had no real way to judge my GMing chops. Then my friend Eli said he would run a game of Rifts for me and a few of our friends(and this one guy who just sort of hung out at the game store, no one really liked him, but he was in our game for some reason). The game was awesome, I played Yukon Cornelius, a dog boy with a sombrero and a corn cob pipe. He was awesome. True story. Anyway, that game is burned into my mind like giant radioactive rubber pants. The pants command me to run a game.

I sat down with only the vaguest of ideas for a campaign premise. But during the week something wonderful happened. Pinnacle announced that they have the rights to make Rifts books for Savage Worlds. After everyone checked to see if it was still April first, or if hell had frozen over, it was found to be a true statement. This is huge. HUGE!!!!!!!(extra exclamation points)

Anyway, the game started and we got some characters made and the setting built. The campaign will focus around a bunch of monsters from the Rifts and the Coalition each fighting over a small town in the rockies that would rather not be in the middle. Its going to be pretty sweet. I utilized some rules fixes I came up with to fixe some of the problems with Palladium's system. I made sure to announce them all quite loudly in the recording, should you wish to try them out. So far they seem to work well, though the number of skills is way to high.

Here is the recording should you wish to watch.

Posted by Jacob Possin at 10:45 PM No comments:

I normally don't do reviews. Its not that I don't have opinions, but I generally prefer to avoid telling people what to play. That said, I have recently run into a game that I think is truly fantastic and I would like to recommend it. It is a free pdf so I feel OK about recommending it. If you like it, great. If you hate, nothing lost but a little time. So here goes, my first review, a review of Exemplars and Eidolons. 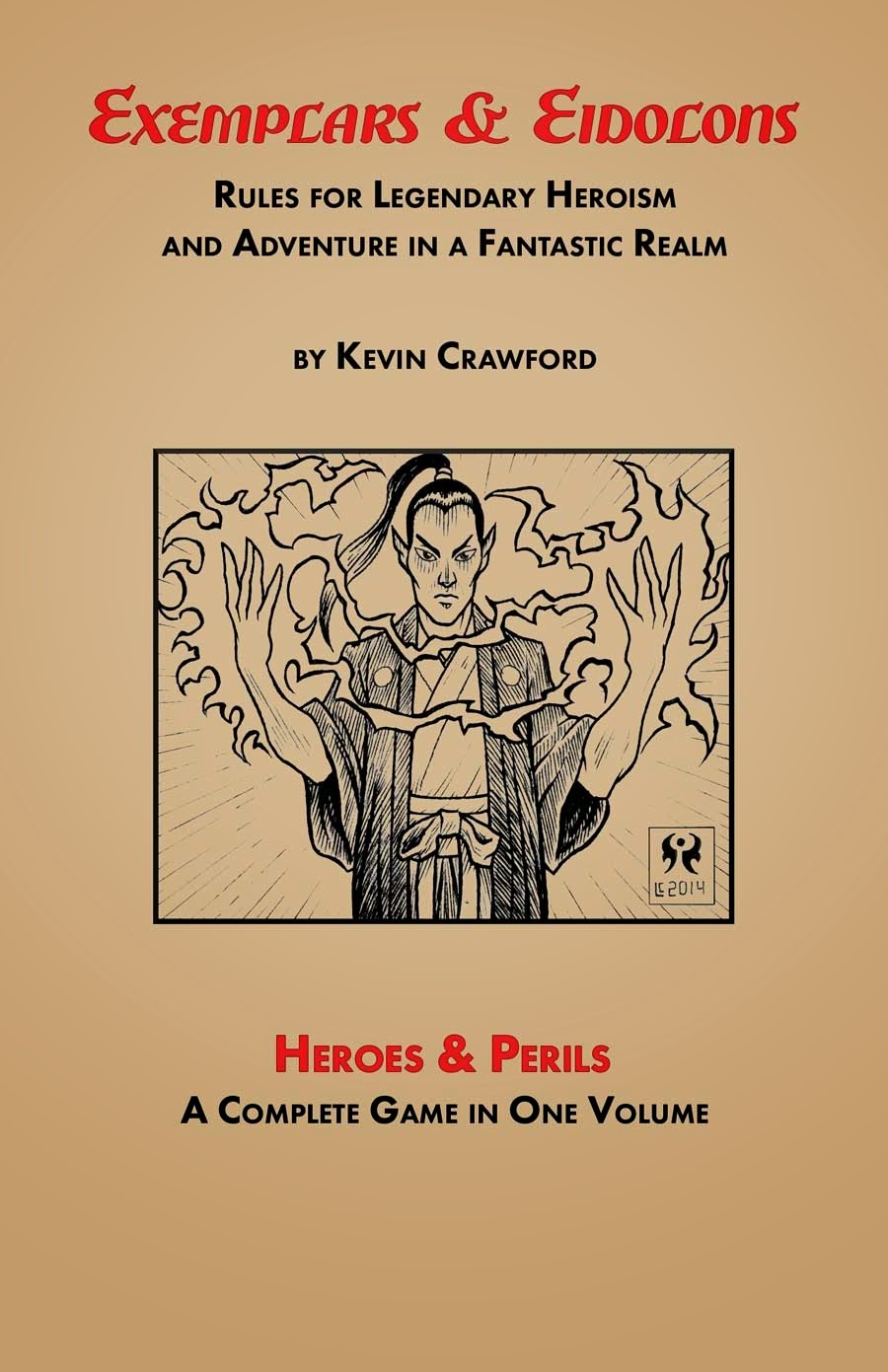 The Peritextual Elements
The cover art is decent, in that old school D&D style. I will admit, it did not draw me in at first. It is the kind of art that grows on you as time goes on. The internal art is solid, it is basically solid and appropriate(it is taken from a couple of open source art packs, so make of that what you will). The layout is purposefully in the style of the original D&D booklets and is designed to showcase how to do that layout. As such it is very fine. Simple and well laid out, no frills. By and large the peritextual elements of the game are solid and well thought out.

Game mechanics
Overall this is the slickest take on classic OSR based rules I have ever seen. It avoids much of the rules baggage I have seen in many OSR games. Each player rolls 4d6, drop the lowest, for their attribute(which are the standard fare. This is followed by writing down three facts about your character. Facts are a single sentence that defines a relationship, influence, or background about your character. When a fact applies to a given situation you gain a +4 to a given ability roll. to  Players then choose between one of three classes: Warrior, Rogue, or Sorcerer. Each grants the player a set of gifts. Gifts are special abilities and super powers. Players get two from their class and one from any list at level one. You then pick weapons, equipment, and write down effort and HPs. Effort is new, it is how one uses gifts and some magic spells. Leveling up is pretty slick, you may choose any class at the new level and can switch back and forth as you go. Every level grants an additional gift and some more HP. Sorcerers work a bit different than many OSR games, they can cast any of the spells at a level they have mastered, though only a couple per day, per level. You basically start out as a master magus and go up from there.

The die rolls are split between three types, ability checks, saves, and attack rolls. Abilities are rolled against with a roll under mode. Saves are also rolled under, though you add your level in appropriate classes to the appropriate saves. Attacks are rolled pretty much standard. Damage rolls are an interesting take. You roll the damage and compare it against a chart. The results will end up between 0 and 4 damage. Damage comes off of the player characters hit points and NPCs HD(this is pretty great as it lets you pull NPCs from most any OSR game and use them here with minimal fuss).

The other really spiffy mechanics are Wealth and Influence. As you are playing larger than life heroes you don't really have to worry about everyday money, in fact the game tells you to just allow players to get whatever incidental items they could reasonably want. Wealth represents serious riches, like dragon hoards and the like. You can spend it to get influence and other big things. Influence is quite possibly my favorite part of the game. The GM is encouraged to build a really big problem and a bunch of lesser problems. Each one of the lesser problems is worth a set amount of influence. You gain influence by doing great deeds, completing quests, using wealth and gifts. Once a minor problem is taken car of you gain XP, and when a major problem is dealt with you gain much more XP. It is a really slick system.

Setting
The setting is quite slim. Basically the game tells you to play larger than life heroes in a fantasy world and leaves the rest up to the group to decide. I kind of like that as I immediately thought up a bunch of scenarios and campaigns for the game. It has an intrinsic setting that is implied more than outright stated. I rather like this method, as it leaves room to play with the features in new and interesting ways.

Overall I rather like this game and, as it is free, I think it would be worth your time to check it out. At 48 pages it is not a heavy game, but it handles larger than life heroes rather well.
Posted by Jacob Possin at 9:55 PM No comments:

Character creation in Trek to the Stars is a bit more involved than I normally like to make. That said I think there is a lot of interesting things that can happen in a more involved character generation. I hope I am right in that, and not just kind of meandering at the mind. In this post I will be putting down the framework of character creation, step by step. For those just picking this series up, here is the precious posts:
Initial thoughts
Part 1: The Pitch
Part 2: Skill roll basics
Part 3: Potential Campaigns
Part 4: History in brief
Part 5: Keys and Secrets
Part 6: Timeline and Technologies
Part 7: More technologies

Character Creation
To create a character for Trek to the Stars you start with the basic campaign template. Decide what sort of game you wish to play as a group. The game makes the assumption that you will all play members of a star ship crew travelling the space-lanes, taking colonists and cargo to and from the various outposts of human occupied space. However, if you wish to play a colonist, miner, or some other form of game the mechanics will allow that style of play.

Star Ship
Decide at this point weather or not your ship is registered with a government/organization. If you are registered that has some benefits and some downsides. If you are not, you remain free of outside influence, but that carries a lot of downsides as well. At this point choose a model of star ship from the list provided(no list at the moment, but I will have one in the final draft, for now just make up a cool sounding star ship) Also each player should write down one fact about the ship. Facts are one sentence descriptors that can enhance rolls during play.

Character Origins and Motivations
Next you choose an origin. Origins cover your birth planet/government, whether you are a baseline human or some variant, and your defining background events. You will choose one Origin Key that will be most important to your character. Following the origin you will choose a motivation. Motivation Keys are the driving force for your character in the moment. They are what you want, what you need. Check out part 5 of this series to get advice on building keys.

Types
At this point you will also choose whether or not your character is a baseline human or something different. Currently I have only three types available, but my end goal is to increase that number to cover all the types I have discussed in previous posts. This is an area I am still heavily developing so any thoughts on this would be very welcome.

Skills
You start out with 35 points to spread among the various skills. No skill can start higher than five dice. This may be not enough skill points(or it may be too many) for actual play. I feel that this works, but will need to run some tests to see if adjustment is needed. I am currently using the skill list I set down in part 2, so check that out for the current list.

Achievements
Your character starts with three achievements. Achievements are specialties or talents within a given skill. Currently I do not have a bunch of names for specific achievements, but I do have a set of rules for creating them. An achievement can do one of the following:

Finishing Touches
Write down three facts about your character. One should be about their training and background. The other two should be about relationships or social duties your character has. These are very important as they allow you to increase the number of kept dice you can have on a given roll. These Facts also allow for a bit of niche protection and individualization of specialty. Also here is where you mark down any signature equipment and your physical description. And then you should be done...

Posted by Jacob Possin at 11:29 PM No comments: