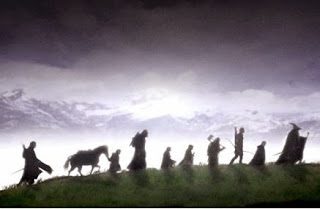 This is not a complete idea yet. Basically I am trying to build a framework for exploration and long distance travel in Fate. I would like to be able to model The Hobbit andThe Lord Of The Rings with Fate. Most of those books were just traveling from one location to another. In fact I would like to be able to model some of my favorite Sci Fi as well which are often just long trips to somewhere where the adventure is happening. As this is a rough idea I would welcome any thoughts as to how it could be improved. so without further run up, here is the basic idea.

H'okay, so we have a goal, now what? Exploration is like an extended challenge scene, with successes and failures creating situations to play through. The number of rolls and the difficulties of the rolls varies depending on what you are doing. The number of rolls should equal a minimum of the number of characters involved. The difficulties should start equal to the highest skill rating of the characters involved. Increase the difficulty by two for every other character involved. Increase the difficulty by two for each difficulty that has already been overcome(they stay the same if you fail to overcome a difficulty). This will lead to some very high difficulties, higher than most player can achieve without some help. Should the players wish, they can use stress to increase a roll. For every point of stress the player places on the character add a point to the result of the roll. Stress cannot be recovered as normal during a travel/exploration sequence. You must have a recovery scene in order to do this.

There are two ways of deciding on the travel, mapped and unmapped. When dealing with mapped exploration/travel you take a sheet of paper(a big sheet of butcher paper is my favorite, it handles crayon the best, true story) and mark down your start point at one side and your goal at the other. then fill in each major terrain based obstacle on the way. there are many types of terrain that could fit in an obstacle: Plains, Swamps, Mountains, lake/sea/ocean, hills, forest/jungle, something really out there. The idea is to fill in the map with a number of intervening terrains so that you can build the world as you explore/travel.

Example: You and your crew are heading to face a dragon in a lonely mountain lair far away. To get there you must find the hidden fortress of the elves in a series of hidden valleys, pass by the massive mountain chain, find a path through a massive and dangerous forest, before finally finding the secret entrance to the dragon's mountain lair on the other side of a lake.

Once you have your terrains marked out on the map the rolls begin(woot!). Should you fail a roll then a contest or conflict scene will be instigated. The players at the table must decide what failure means and what type of contest/conflict is appropriate for this scene. The GM should make the opposition difficult but not unsurpassable, In general I find the device on pg. 222(Fate Core) very useful for helping figure out what I need for a given scene. Once the scene is done the players must try and overcome the obstacle again(unless the GM feels as though the conflict/contest scene has solved that issue somehow), but at base difficulty.

Example: Our heroes made it through the mountains and have just barely fought off a savage attack by a bunch of giant spiders. Some of them are poisoned and all have at least one consequence. It has been a rough journey. They have failed at getting free of the forest(again) and have decided that getting captured by elves would be a great idea. The player of the Halfling Thief spends a fate point of fate on his aspect, "And Here's The Burglar!" and has remained free. They must now enter a contest with the elves to escape. It will be very tense as these are wood elves and they are really good at remaining vigilant. If only they had a ring of invisibility or some-such... 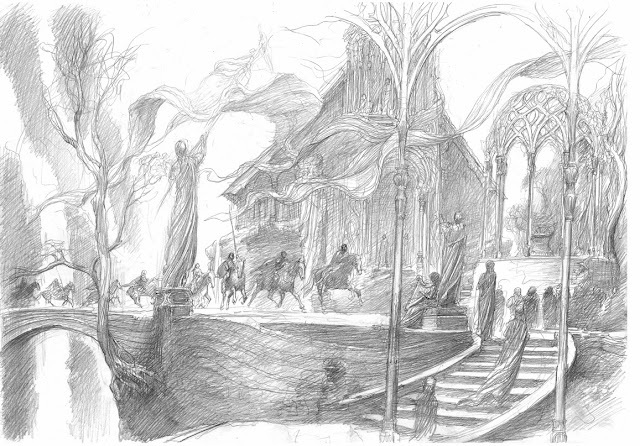 The GM can also compel a setting aspect to make the initial conditions of this scenes far worse, or to change the nature of the conflict or contest.

Example: Earlier in their adventures our party was just leaving their starting location, the halfling river communities. They were on their way to the hidden fortress of the elves to get the information they need to cross the mountains. As it is early days for our heroes they felt it was too early to spend all their fate to beat the first obstacle, they failed(ouch). After a brief discussion they think it would be fun to face down three river trolls who are run a toll service on the road(The Dwarven Fighter's player is a bit of pun man). The GM thinks that is fine, but then slides out a bunch of Fate points and says if they accept it they will start out captive, rather than a fight it will now be an attempt to hold off the Trolls until dawn(the GM is taking some liberties with Trolls here, but it sounds cool) the players accept, and now they must have a contest to hold the Trolls off until sunrise and the trolls will turn into stone.

Recovery scenes remove all stress from stress boxes and allow for rolls to recover consequences. However should your players choose to use a recovery scene all the remaining difficulties will increase by one for the Travel/exploration sequence. Also there will be an extra overcome roll in  the next terrain.

Example: Our heroes have made it through the mountains. The Gm made it a rough go, though. He split the party, the thief got compelled to go off on his own and ended up in a contest of wits(to the death!)with a monster in the deep caverns. In the end he wound up spending a fate point to get away(he created the advantage, "What have I got in my Pocket?" and then spent a Fate point to declare it was a magic ring he found. After a bit of haggling the GM agreed to this(he basically said that the player could have it if the GM could compel it in unspecified way). The others in the party had to fight thier way through a horde of goblins. They all made it out, and it would normally be time to move on to the next overcome roll, but the GM compelled the goblins hatred of dwarves and they gave chase with great wolves(because why not). They got away when the wizard spent his last fate point to invoke his aspect, "Agent of a higher power," to summon some eagles to rescue them. Now they are all battered and bruised, so they decide to have a recovery scene. THey come up with this hidden house of a shapeshifting druid named Bjorn who lives in the woods with his awesome animal friends. They then recover. After they must deal with a new obstacle, the river of forgetfulness. THey overcome it when a dwarf spends a consequence to make the difficulty(he fell in, so he forgot a bunch of stuff, major consequence). 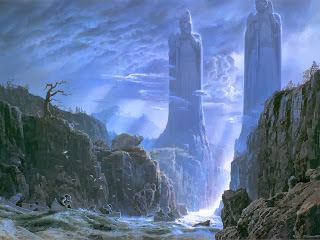 So that is what I have for the exploration/travel rules. I would love to hear what you think, as I know that this is incomplete. I think there needs to be something extra, or maybe something less? I don't know, all I know is that it is not where I want it yet.
Posted by Jacob Possin at 4:51 PM No comments: