A conversation that Ron and I had has made me want to delve a bit into the weapons technology of our setting. He asked what sorts of weapons we used? Whether it was traditional cartridge weapons or if we had lasers or mass drivers, or what. So I thought I would devote a bit of time to the concepts. It seems I can't get past the writing of weapon descriptions. I have spent the last six months writing what amount to equipment guides for Jadepunk, and now I am writing them for our Atomic Robo game. Heh, guess we all have our niches, and this is mine.

Most human weapons are chemically or electromagnetically compelled. By and large they come in two forms. Magnetic accelerators are basically a rail gun that fires small bits of metal at incredible speeds. This works like the guns in Mass Effect only with electromagnets rather than mass effect fields. Recently there gas been some experiments in man portable gravity based projectile weapons, but they are still experimental. The other weaponry used are gyrojet weapons. Mostly they are used for micro-gravity and zero gravity environments, as the kick from a normal gun can be problematic.

The Europeans(from Europa) have never needed projectile weapons as they have Telekinesis and can just accelerate matter on their own.

The Hellions main weaponry are pulsed laser weapons. They have near zero recoil and are intensly powerful, They are not, however, silent. When the laser hits the surface of a target it cooks off a layer rapidly. This causes a popping sound. They are generally set to fire off bursts of three to five laser blasts, in less than a second, blowing a hole in the target up to nearly three inches deep and making what sounds like a loud bang(all those expanding molecules gotta go somewhere).

There are of course loads of other weapons that are used, but these are the primary weapons used by each species.

Here is a recording of the game, should you wish to watch it:

Posted by Jacob Possin at 6:19 PM No comments: 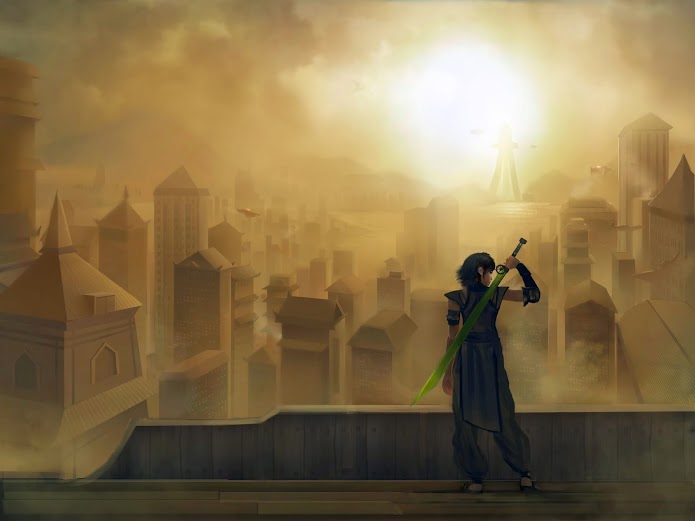 As some of you may know I am currently writing a series of short stories for Serial Tales: Iconic Adventures, a Patreon that +Ryan M. Danks and I started. The story series I am writing is set in the world of Jadepunk, so I thought it would be fun to write up the characters of the series as Jadepunk characters. Sort of like a preview, only playable. A playable preview, if you will.

As I wrote her up, I realized that there are going to be some gaps in the narrative here. A lot of her aspects only show up during the story. I guess that is one of the differences between a game and story. In the game you have the character in broad strokes right from the start, whereas in the story you are introduced to the character one piece at a time.

Name: Lacao Keahi
Princess of the border province of Shinkenu, an idyllic island on the fringes of Kaiyumi territory.
Portrayal: Provincial Kaiyumi Princess
Nearly from birth Keahi was raised to rule. Her mother ensured she had the finest tutors and was schooled in all the royal arts. Though only the ruler of a small province, her mother had much higher aspirations for her daughter.
Origin: Trained To Rule
Shinkenu has recently discovered a major vein of red jade in the extinct volcano at the heart of the island. This has led to a great deal of interest by the great nations in the island. Keahi's mother has gone off to the capitol to negotiate new trade contracts, leaving Kaehi to rule for the time she is gone. In the last few days some of the fishing boats have gone missing. Her advisers think it is the weather, but Keahi fears something darker is at play.
Inciting Incident: War Nips at Her Heals
Keahi sees her current situation as a chance to test her theories on leadership. She disagrees with much of how the Empire runs things. Her mother thinks it is just a phase and that a little authority will help get it out of her system.
Belief: Government Must Serve the People
Shinkenu has very few defenses. It had never needed much previously, as they had few strategic resources. Now that red jade has been discovered, the defenses are lacking. Those in charge are all to aware of this.
Trouble: On the Run From Trouble To Trouble

Assets
Lacao Family Armor: Blue jade armor that can instantly form around her at her will. Increases her speed, protection, and combat prowess. One hundred years ago, Kaiyu began to conquer and colonize many of the smaller island nations that surrounded it. During this time a young general named Lacao Heido rose to prominence. Shinkenu and this armor were given to his lineage as a sign of the empress' pleasure.

The Seal of Shinkenu: Her mother's seal, used on all official documents. Entrusted to Keahi until her mother's return. The seal represents the imperial power granted to the leaders of a province. Whoever holds the seal, holds the fate of the family.

Posted by Jacob Possin at 5:03 PM No comments: